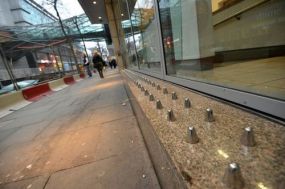 These metal spikes, which are termed ‘defensive architecture,’ prevent homeless people sleeping outside department stores. Selfridges claim that these spikes are a result of ‘customer demand’ not to be ‘harassed’ by homeless people whilst shopping. No doubt there is some truth in this: customers find it especially offensive to see a homeless individual in this particular place. But why should it be the department store that is the site for this problem? Why is it particularly offensive to see a homeless person on the way into or out of Selfridges, rather than anywhere else?

The department store is the perfect place to buy a commodity, and it sells no necessities. The stores are in fact a denial of the existence of necessity at all: they are worlds in which there is only indulgence, where everything is desirable but nothing is needed. The stores completely separate want from need, and in fact deny the existence of need entirely. To be immediately confronted with someone in need outside Selfridges threatens the whole ideology of the store.

This celebration of the department store as a space of glamorous desire with no undesirable elements has made its way into popular culture in the last few years as well, with both ITV and BBC running major (ongoing) series’ about Victorian department stores, Mr Selfridge and The Paradise respectively. Mr Selfridge embodies this kitsch atmosphere (Milan Kundera defines ‘kitsch’ as ‘the denial of all shit’) with unsavory aspects expelled and the untainted celebrated. The BBC title The Paradise embodies this same thing: the department store is a place without undesirable aspects.

The spikes represent the failure of the department store to progress beyond Victorian attitudes to the poor (department stores saw themselves as breaking out of these class prejudices). In our age of austerity, a repeat of Victorian austerity, the poor are victimised and blamed (and Selfridges is back in our consciousness). Here is another example of vilifying the needy (see thesearticles). Even the phrase ‘defensive architecture’ suggests that homelessness is an attack that needs combating. Homelessness threatens the department store ideology which depends on desire and excess, so evidence of the homeless outside Selfridges operates as a reminder of the falseness of this ideology and causes the consumer to feel guilty by reminding them of need and threatening to prevent them from believing in the magical and pure world of the department store (and the city).

We are currently  featured at the New Socialist, whose archive of our recent work can be found here.

Previous collaborations have been with The Guardian, Thought Catalog, Critical-Theory and other places.