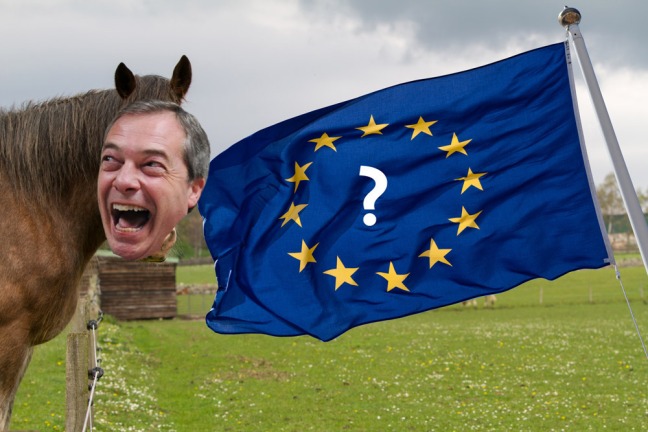 Daniel Bristow discusses the old gags of psychoanalysis, the comedy of Brexit, and Mark Fisher.

The gag of psychoanalysis is that two people walk into a room… in search of a punchline. Their hope is that – through the work – they’ll find one (maybe one that’s already there, in that knowledge that doesn’t yet know itself that is the unconscious; maybe, even, they’ll find one in the form of a new signifier). The very search itself concerns Freud’s ‘Analysis Terminable and Interminable’, the latter clause of which Lacan is at pains to remind us in Seminar V could more properly be translated as something like ‘analysis to the power of infinity’.[1] Imagine a joke to that power; one that doesn’t end; that’s kept funny, made funnier and funnier; one that simply isendless forepleasure: if weaponised – like the joke in the famous‘Funniest Joke in the World’ sketch in Monty Python’s Flying Circus– it would destroy us, from oversaturation.

What’s funny about Brexit is that it isn’t funny; its endless extensions, in search of a punchline, can be read as being in the service only of retroactivating it as a joke. This trawl of humourlessness shows up not only the dearth of humour that’s followed in its wake, but also that which paved its way. (As an aside, we could here impute a paranoid origination to the Leave or Remain referendum: is Brexit the furthest-fetched curveball the right could think up to derail the momentum of Corbyn(ism)? That is, to do so as permanently as possible: hereditarily; manufacturing Brexit as Labour’s inheritance? And could Labour (bring itself to) rely on the same playground retort that the Tories used throughout the coalition, and up till now: ‘it’s not our fault, Miss, it was Labour that did it. We just got here afterwards…’?) If not a joke, Brexit certainly seems to be an exercise in absurdism: the moment of Theresa May offering up her resignation as a bargaining chip for voting in her version of ‘the deal’, which she lost anyway, was a bizarre negation of negation illustrative of just how lose-lose everything has become.)

Like every political thing else, Brexit’s been met with what Mark Fisher encapsulates in his description of Ian Hislop’s one-size-fits-all snigger at every newsworthy political thing throughout Have I Got News For You, which he identifies in his article ‘The Strange Death of British Satire’, collected in K-punk:

No matter what the infraction, Hislop’s response is always a supercilious snigger[.] As the editor of Private Eye, Hislop has played an important role in exposing […] abuses. But on television his mocker-in-chief persona serves ultimately to neutralise and cover over[:] one snigger fits all situations.[2]

A smirk, an eyeroll, a cutting comment, and the job is done: canned satire. Like in Žižek’s conceptualisation of canned laughter, something is being done for us in this form of broadcast satire, so we don’t have to do it ourselves, something almost of an analgesic quality, a kind of pleasure-relief as opposed to pain-relief. This is intensified to the nth degree when political satire gets filtered through the Dave-machine endlessly rerunning these now-old and decathected comedy panel shows: Have I Got Fish and Chips Papers For You. To use Fisher’s words to sum up this conjuncture; in not tracking well enough cultural changes over time, in the 1950s such comedy ‘might have posed a threat to the authority of establishment politicians who expected unthinking deference from the electorate’, but now, ‘when politicians are routinely ridiculed and a weary cynicism is ubiquitous,’ British ‘satire is a weapon used by the establishment to protect itself.’[3]

With theBritish broadcasting corporate satirical backstop in place, how might we approach an analysis of Brexit as a phenomenon, between psychoanalysis and comedy? Let’s look at it through the lens of Lacan’s interaction with Jean Genet’s play The Balcony in Seminar V. The plot revolves around a brothel known as a ‘house of illusions’, to which men flock to play out their fantasies of acting as prominent state functionaries – as judges, bishops, and generals – whilst revolution is happening in the streets. The character of the Chief of Police regularly pops into the establishment, mainly to inquire after whether anyone’s turned up yet who wants to play him in one of these little mise en scènes, and he has over and over to be let down gently. At the end of the play, a revolutionary – plumber by trade – arrives to finally assume the role of Chief of Police, and to enact a fantasy scene with one of the women, whilst being watched through portholes by the brothel madame, the fellow fantasists, and the Chief of Police himself. In Lacan’s summary (presumably from memory of one of the play’s first performances):

Once the character – who is actually the heroic figure in the drama – has been clothed in all the trappings of the Chief of Police, the prostitute makes the gesture of throwing in his face, after he has cut it off himself, that with which, as she coyly puts it, he will never deflower anybody again. With this, the Chief of Police, who was very close to arriving at the zenith of his satisfaction, nevertheless makes the gesture of checking that he still has his.[4]

We might offer to this denouement a new Lacanian reading. What’s funny in Genet’s Balcony is that he has in effect made a structure, a function – the big Other (Lacan’s structural position assigned to a kind of supposed adjudicator, guarantor, or overseer) – into a character: the Chief of Police, who needs to check his willy’s still there. However, we cannot laugh at the big Other itself doing this (if not anthropomorphised via a fiction, even if one with the structure of truth). The only people that can are those who don’t yet know that the big Other doesn’t exist. But the joke’s on them, as whether it exists or not, it has effects, it functions.

Genet’s humour is in exposing the fallibility of the Platonic Forms. In Seminar XIX, Lacan discusses the horseplay between Plato and Aristotle on this question, stating: ‘Aristotle, not without peremptory arguments, turns upside down what Plato stated, namely that the horse is upheld by partaking in the ideaof the horse, that what is most realisthe idea of the horse’ [my emphases].[5]InThe Balcony,the celestial Form of the Chief of Police becomes insecure about his phallic function, when faced with an actor, created in his image, castrating himself: the plumber who puts the Other’s plumbing in order.

In straying onto the plain of horses and plumbing we might be reminded of the little quipper Little Hans, but also of Raymond Queneau’s ‘long joke’ that Lacan recounts in Seminar V, concerning the examiner and the candidate, and in which the ideaof the horse is very important (in fact it is a form of joke which Lacan is steering us towards seeing as being defined not just by the punchline, but by the maintenance of witticism throughout):

‘Tell me’, says the examiner, ‘about the battle of Marengo.’

‘But’, says the examiner, ‘can’t you tell me anything more precise about this battle?’

The candidate thinks for a moment, then replies, ‘A horse rears and whinnies.’

The examiner, surprised, seeks to test him a little further and says, ‘In that case, can you tell me about the battle of Fontenoy?’

‘The battle of Fontenoy? … Dead soldiers, wounded soldiers! Everywhere! All of that, and more.’

The examiner, interested, says, ‘But, young man, could you give me some more precise details about this battle of Fontenoy?’

‘Oh!’ says the candidate. ‘A horse rears and whinnies.’

‘But, my good man, can’t you tell me anything more precise about this battle?’

‘Excuse me,[‘ the examiner cuts in, ‘]I would have you note that the battle of Trafalgar was a naval battle.;

The Brexiteering horsemen’s battle cry may have been aimed at causing a similar wobble to that which the Chief of Police sustains in The Balcony in the big Other, but where the big Other is(n’t) (is or isn’t; taken as existent or not: it really doesn’t matter); that is, better put: in the place of the big Other, there are no Platonic Forms. There is no Form of the Architects of Brexit, or of its Subjects. No such Forms are peering through portholes, double-checking their bollocks. Between being duped and non-duped, between lies and ‘post-truth’, are we choosing foreclosure over half-saying?Instead of the Forms, there is perhaps only something of the oscillation that the Chief of Police brings our attention to through his Otherly personification, when he states: ‘well, gentlemen, above God are you, without whom God would be nothing, And above you am I, without whom…’.[7] Stress is laid in the text on the cut that this ellipsis heralds. Ultimately, then, we’replaying up, really hamming it up, and fucking it up, for ourselves, and the joke’s on us (and yet now might be just the time in which refinding the comic object can become radically open to us, too).[8]

This was a talk originally presented at The Freud Museum, the video of which can be found here.

[1]‘One cannot but be struck by the fact that in one of his last articles – the one whose title has been incorrectly translated as ‘Analysis Terminable and Interminable’, whereas in fact it’s about the finite or the infinite, and where the question is whether an analysis comes to an end or must be situated in a kind of infinite range – Freud points out the projection to infinity of the aim of analysis in the clearest way possible’. See Jacques Lacan, The Seminar of Jacques Lacan, Book V: Formations of the Unconscious [1957-1958], ed. by Jacques-Alain Miller, trans. by Russell Grigg (Cambridge: Polity, 2017) p.300.

[8]If not the phallus per se, it is perhaps its veil that has – however temporarily – fallen, through this self-castration, leaving the possibility for opening onto the comic, in the precise terms of Alenka Zupančič’s argument in The Odd Inthat ‘in comedy we are usually surprised by things and events that we, at least roughly, expect. And we could even say that what often surprises us is precisely that there is no particular surprise—that what is behind is precisely this: Here it would be difficult to resist quoting one more time Groucho Marx’s famous line: He may look like an idiot and talk like an idiot, but don’t let that fool you. He really is an idiot.’ See Alenka Zupančič, The Odd One In(Cambridge, MA: MIT Press) p.210.

One thought on “Brexit Ha Ha” 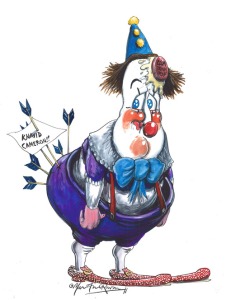